Review of “Yes, I Could Care Less: How to Be a Language Snob Without Being a Jerk” by Bill Walsh. 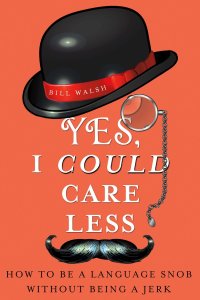 Yes, I Could Care Less is a funny book for editors. It’s for editors because, like Bill Walsh, we care about words deeply. We recognize aspects of our own personalities in his self-mockery about his obsessive-compulsive quirkiness and his editorial pet peeves. It’s a book for editors rather than a general audience because Walsh, a copy editor at The Washington Post since 1997, tackles some of the most difficult copy-editing conundrums that often stymie editors. Topics include subject-verb agreement “follies” with expressions like “a lot” and “one of those people,” restrictive/non-restrictive clauses with their tricky use of commas and the which/that choice, how to handle trademarks, difficult decisions about hyphenation, and the pitfalls of typesetting technology.

Yes, I Could Care Less reveals what a subjective task editing can be. There are rules, style books, and house style guides, but there are many issues upon which even expert copy editors will not agree. The book opened my eyes about the potential for creativity and what Walsh calls “tiny acts of elegance” in editing work.

As the title suggests, Walsh addresses the ongoing debate about the importance of correct word usage, punctuation, and other subjects dear to editors’ hearts. In the modern world, are editors irrelevant jerks? Individual copy editors may have their differences, but according to Walsh, the real battle is between the sticklers and the spoilsports. How much do the sticklers concede to the reality of ever-evolving language and usage? What the spoilsports call non-standard, the sticklers call errors. The spoilers’ point is that the function of language is to communicate; perfectionism isn’t necessary. Walsh’s answer to this is that language is an art, and in the arts, form is everything. We sticklers are language enthusiasts.

Walsh is, however, always diplomatic and good-humoured. He informs us that spoilsports aren’t all uneducated or stupid people who use poor grammar because they either don’t know better or don’t care. There are professors of linguistics among the spoilsports, and Walsh grants respect to some of their arguments, enabling readers to gain a broader understanding of the complexity of the debate about expressions such as “I could care less.”

He allows himself a nice diatribe on the “meta-stupid,” defined as “those who go out of their way to do stupid things, especially in the name of being smart.” And if you want to be confident you’re not a “meta-stupid” editor, be sure to read his two-page section on how to not be a jerk about correcting grammar and spelling (pp. 61–62), as well as Chapter 7’s “Rules That Aren’t.”

Walsh packs Yes, I Could Care Less with high entertainment value, and not only from the abundant wordplay you’d expect from the author of Lapsing Into a Comma and The Elephants of Style. He adds interest with samples of his tweets from @TheSlot, “A Dictionary Dissent” boxes (though these are less relevant to Canadian editors since he cites leading American dictionaries), and “A Reel Mess” boxes containing misquotes (and corrections) of famous movie lines.

Another humorous part is his introduction to “egg corns” (if you don’t know what these are, you should!), with clever examples such as “Old Timer’s Disease,” “site-seeing,” and “a 10-year professor.”

Make no mistake, though—Yes, I Could Care Less is a helpful book as well as an entertaining one. Walsh’s many examples of “tiny acts of elegance” demonstrate his vast editorial experience and common sense. Does he always follow the rules when hyphenating modifiers? No, but he uses his best judgment when evaluating possible ambiguous meanings. Another notable section shows his elegant fixes for “downsyUpsy” problems—when capitalization styles for employee titles and the companies they represent make text look ridiculous.

Finally, to ensure your understanding of current word meanings is up to date, refer to “The Curmudgeon’s Stylebook,” a 70-page alphabetized section at the back of the book. Here, Walsh explains tricky words and expressions that are often spelled, pluralized, or punctuated incorrectly, and word pairs that are commonly confused or misused.

Nancy Tinari is a former Olympic runner who enjoys reading, editing, and reviewing books, as well as writing about fitness and psychology.

Karen Barry is launching into freelance editing and is currently enrolled in SFU’s Editing Certificate program. She has a background in biology and over 15 years’ experience writing and editing research papers, technical reports, grant proposals, and promotional and educational materials.